Yesterday I got jumped on a street corner waiting to cross the street on my way to go pay my rent. Two young dudes came up from each side and one of them asked me for a dollar for the bus. I told them I didn't have any cash, otherwisse I would help them out. All the while, my front right cargo pocket held an envelope with $500 in cash towards my October rent. The other dude then asked me for a cigarette. Typically I turn random people down when they ask, but I was quite literally in the middle of smoking one myself so it would've been awkward to turn him down - plus, I was already feeling uncomfortable at this point. So I looked down towards my pocket, put my hand in to get my smokes out, and that's when it started.

To be honest, it's all kind of a blur. I remember my free hand, the one holding my cigarette, being grabbed and swung behind my back and my cigarette flying off to my side as my arm swing around. I remember a second hand digging in the pocket my other hand was already in fishing about for my smokes. In the moment, that was honestly the weirdest feeling of the whole thing, odd as that sounds. I managed to get the hand that was in my pocket out and swing a solid backhand straight to the face on the guy to my right. Next thing I knew, I was on the ground, my sunglasses long gone, with these two dudes exchanging punches and kicks while digging through my caargo shorts and hoodie pockets. Inevitably finding the envelope of cash. They tried to take my wallet, as well, but I wear a chain wallet and they just couldn't seem to figure out how to wrangle it off my belt loop. Before they took off running, one of them tried to spit on me but I managed to roll out of the way in time.

And oddly, after the one dude asked me for a smoke, they didn't say anything. Not. A. Damn. Thing. It was so fucking surreal. And painful. And emotionally and mentally traumatizing. And a huge blow, financially.

I stayed put, called the police, went through the whole thing the best I could. To add insult to injury, the police made me to feel as though it were my fault in some way. What was I doing walking around with the kind of cash, they asked. Why was I in the area I was walking around when I live a full mile away, they asked. So on and so forth. In a post-incident headspace, that was pretty traumatizing, too.

Let me tell you, gang. I am not one to get scarred or jarred or made to feel uncomfortable or incapable very often in my life. Not genuinely, anyhow. Some things make me emotional and I am crazily empathetic. but true trauma? Not a thing I have had to deal with often, and I am grateful for that. Seventeen years of being a full time single father, working in the funeral industry with actual factual dead bodies, having been told one person was my father only to find out someone else was - both of whom wanted nothing to do with me, having spent a good decade in the clutches of drug addicted depravity, working all manner of customer facing service roles for most of my life, being raised by a single mother with a multi-faceted mixed bag of mental health issues. Not much strikes me to my core or hits that particular nerve of true trauma. I've even been jumped in the past and been held up at gunpoint at a liqour store I worked at. This time, though. This time was different.

I don't know if it's because of how much cash they lifted from me, if it's a result of feeling inadequate due to any number of things - being outnumbered, being older, being the first time my back injury has impeded my response, or something else entirely. But this one hit me hard and I don't see it lessening for a bit of time to come. It. Sucked.

I will say this. If you feel even a little like you might not dominate the situation, should you ever find yourself in a similar one, do not - under any circumstances - put up a fight. As much as it sucked to lose $500, most people get shot when they're robbed in the area I was. Your life ain't worth any amount of dollars, trust. When I got jumped the previous time, I came out the victor. When I got robbed at gunpoint, I just pulled out the cash till and asked if they wanted paper or plastic. Money is ultimately of no value in situations like these.

Thankfully, my brother was able to step in and spot my the lost cash - nearly all of my portion of rent - and he's almost never in a situation to do so. In a sort of weird way that life often has about it, this couldn't have happened at a better time.

In other less terrifying news, I am not full blown diabetic. Yet. Thank the stars. But also, work to be done. As I sit here sipping my third beer of the night after having a pretty robust and sizeable meal. Those things are going to have to change. I've already been working toward it since finding out I may be diabetic and definitely am pre-diabetic. Shit is hard though, no lie. So many mindless habits and routines surrounding food and beverages will need to be addressed in a much more mindful fashion. And I will have to stop making excuses for not getting my steps in and not finally going to the gym like I've talked about for three years now.

And finally, at least for tonight, autumn is officially here! Temps have not risen above 75° for over a week, and every weather app I use and weather person I pay attention to has steady and/or decreasing temps forecasted for th rest of the season. Thank fuck. I have waxed (not so) poetic about my disdain for heat and hot temps, so I am revelling in this weather lately. Lots of wind and cool, brisk breezes. Ever evolving sky when it comes to cloud cover and variation. Requirement for wearing a hoodie. Early dusk and late sunrise - if you don't live in the Midwest USA this time of year, that may sound odd, the enjoyment of later sunrises and earlier sunsets, but damn if they aren't beautiful, each and every one, this time of year. And the leaves. Oh the leaves. Changing color. Falling. Crunching. It's all so amazing.

I want to document the season more this year. I don't typically do good enough job doing so, I just get stuck in the moment of appreciation. Which, ultimately, I wish we all did more of. At the same time, I want to do a certain kind of documentation this year. Dedicated. Specific. So I'm going to endeavor to take a pic from generally the same location at work every day while I'm at work and on break enjoying a smoke. This is the view right above the roofs of the cars in the top level of our parking ramp. Gonna take regular pics of the leaves changing, the clouds morphing, the leaves dropping, the snow falling, the ice forming. 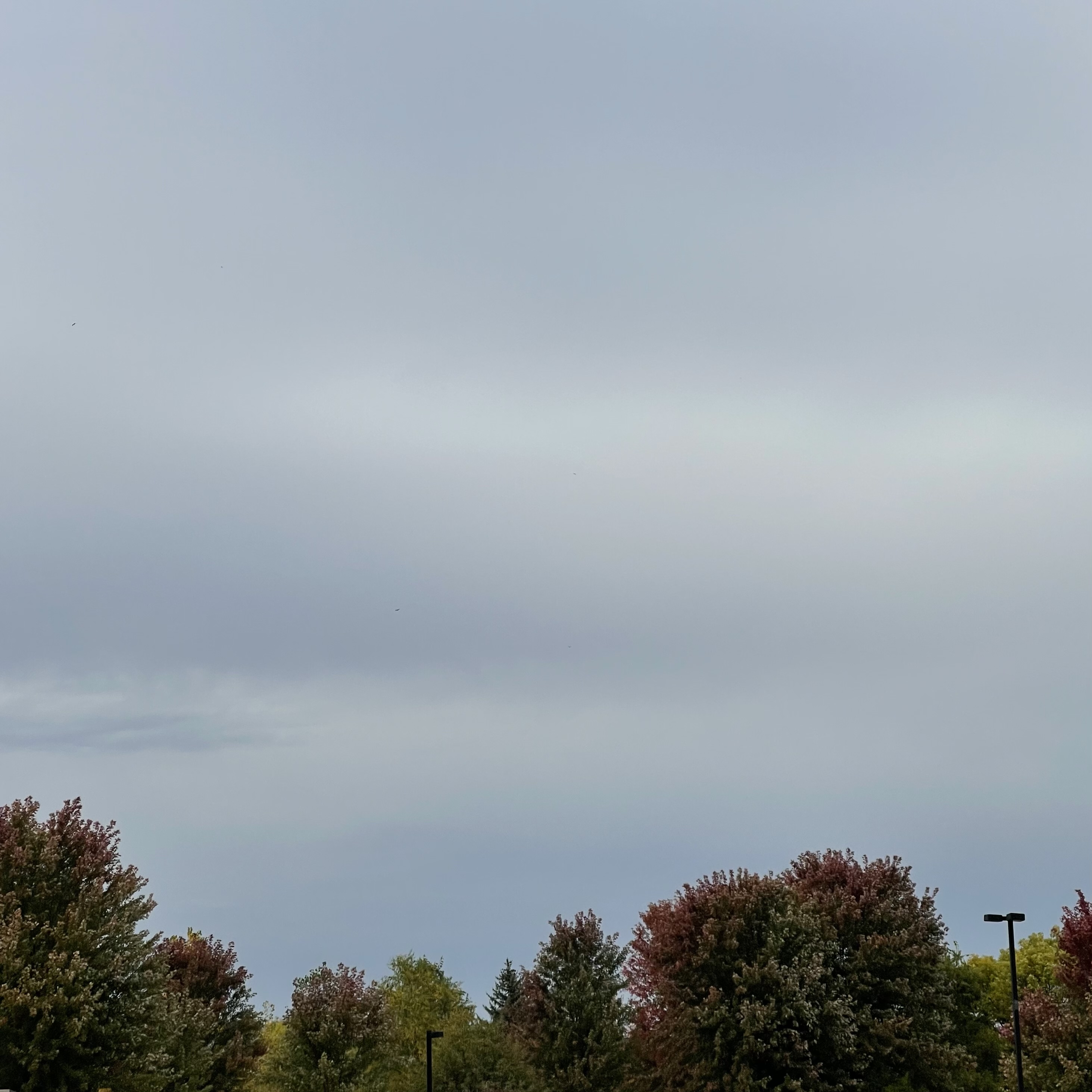 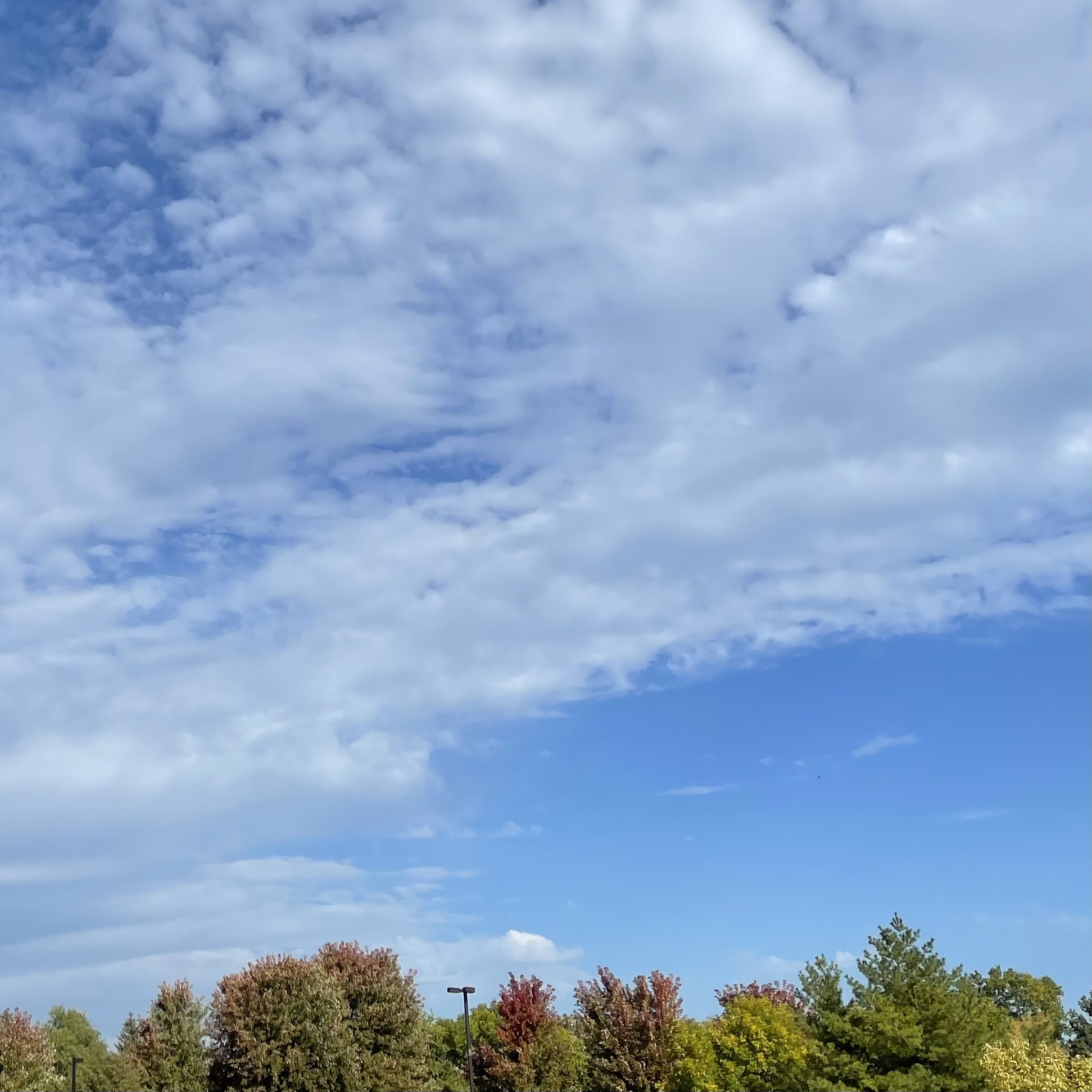 So, hopefully, I stay focused enough - ADD and depression memory loss be damned - to take regular pictures over the next handful of months. It is truly something special here, something I never tire of being in awe of.

I also want to document this amazing plot of natural foliage on the other side of my office building. I don't really spend much time here because we can't smoke here (friggin' stupid, it's outdoors, why can't I smoke here?!), but I stop off for a weekly check in. So maybe I'll continue to document it with videos like this first one I took last week.