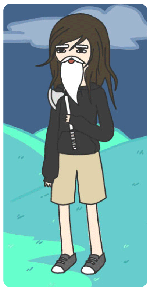 (I got tired of my disproportionately small about box in the sidebar, at the bottom of said sidebar no less. It was a very nutshell and very down played version. I am not one who can be containted within such a small space.)

NAME: I'm calling myself PAINTKILLER here, but I am and have been known by a number of other names.

Of other names that I have been known by, "Daddy" (or some variant thereof) is my favorite. I am (now) a single parent who has raised two children to adulthood mostly on his own.

PRONOUNS: You can call my anything other than late for dinner.

Also, maybe relax a little on the hyper finite definition of self, life is growth and journey - not definition and destination.

AGE: I was the first poor person in my neighborhood to get internet service. My mom didn't know what Windows was and we signed on while the phone headset was on a piece of hardware. Squelches galore.

I spent a lot of time on AOL Messenger and MSN Messegenger, hanging out on various BBS and checking in on random Telnet channels.

SIGN: I'm an Aquarius. I guess it's accurate overall and genrally. The one thing I will say is that I once read Aquarians have issues with their achilles heels/tendons. And I 100% do.

While I do think Astrology is - at least in this day and age - a capitalist cash grab preying on weak minded people, I also believe without a doubt that the forces of nature have real impact on how we, as humans, and all other animals and species and plants on this rock survive.

LOCATION: A little place I like to call Midwestside. City legit, hood adjacent.

While largely considered a flyover city for a lot of touring acts, we also claim fame to a disproprtionately large number of amazing and important and influential musicians - currently and historically.

EMPLOYMENT: I am a customer support agent at a third tier online music equipment retailer.

It's not what I thought I'd be doing at this age, but life - and workplace injuries - happen. I have worked in food or direct customer service most of my life. Call centers are hell, driving truck is rough despite what anyone told you, driving public transportation is soulsucking, and customers are the worst no matter the industry. I worked in the funeral industry (where I got hurt on the job), and it was the greatest industry to work in ever, full stop. Be damned, aging bodies and limitiations of a human's physoical capacity.

PASSION: This is a three tiered list and no tier is more or less important than the other.

I also like some movies and some television programs, with special attention to animation or dark and/or experimental subject matter and expression. I do also enjoy a damn good videogame.

I am a retired graffiti artist, born of the early 90s and retired in the early 00s due to getting slapped with a felony and finding out I was going to be a father. Letterform and logo work are of elevated interests for me. I've done thousnds of metal/extreme music logos and a decent amount of vanilla and/or business logos. Years after painting my pseudonym on all manner of decrepit building and machinery and public space. Life is cruel, sometimes.

Additionally, I built a graphic design mini-empire on the back of the mostly Midwest USA rave scene of the early 00s. Designing logos and doing flyers and release artwork and the like, almost solely, across all small cliques in the scene for a few years.

When it comes to music, I am (these days) a part time producer of weirdo electronic music mostly centered around jungle stylings and breakbeats. I tend to make atypical styles even when it comes to supposed atypical styles. My favorite stufff to produce is hard jungle, breakcore, jungle techno, drum'n'bass, breakbeat hardcore, hardcore, IDM, and the like. But I have prodiced all manner of electronic music in the last 20 years.

I have had music released on a total of 6 vinyl records and 6 CDs, each a different release/title, and have dozens of netlabel and digital releases under my belt. Additionally, I ran my own successful jungle and dub focused netlabel and ambient/experimental netlabel for about 7 and 5 years, respectively. I have played live and DJ'd all over the Midwest USA, organized successful large and small events in the region featuring first time appearances along with national and international touring acts, and collaborated with producers and record labels all over the globe, winning a couple of friendly remix competitions and opening for some of my favorite producers and DJs along the way.

I also ran a well respected - for relevant scenes and for the time - ad-free, independent, self-hosted, self-designed, and self-maintained music blog for over a decade. I miss it dearly, wish it was (at least) still archived, if not active.

When it comes to literature, I don't have many trophies or terribly noteworthy talking points to mention like I do for art and music. That said, I've written bad poetry since I was a teenager and have been taking notes for writing a book for over a decade, earnestly beginning to write it over the last handful of months.

RELIGION: I haven't found a religion I 100% vibe with. There's bits and pieces of several that I can identify with and sort of incorporate in my life, but they are less specific to the religion and just more like healthy ways to live life and treat life. I will say this, though - I really don't care about what you or anyone else believes when it comes to religion and faith, as long as you are not weaponizing it and shoving it down other people's throats. Full stop.

POLITICS: As an American living here for the entirety of his now middle aged years, I say fuck it all. Two party system is a joke, is less two parties than it's ever been, while being run entirely by corporate interest and the goal of endless and limitless disproportionate accumulation of wealth and is increasingly less and less concerned with serving the average citizen, let alone representing them.

CERTIFIFCATIONS: I have gone through a lot of training programs for a various number of things, work related and not.

EDUCATION: Aside from the above mentioned certifications, I graduated high school with a respectable 3.0 GPA. I have started and not completed a degree/program at the college level a total of three separate times. That said, I have a minimally above average IQ and am constantly digesting new information simply out of curiosity.

FAVORITES: A list of things that I actually have a favorite(s) in.

- Autumn, of course.
(And if you live in the Midwest USA or anywhere with weather and seasons that resemble the Midwest USA and autumn isn't your favorite season, as well, well then, you're a degenerate.)